New Delhi: Stepping up against the use of derogatory remarks made by the leaders of the Bharatiya Janata Party against environmentalist and Chipko Movement leader Shri Sunderlal Bahuguna, the Uttarakhand Wing of the Aam Aadmi Party protested outside the BJP Head Office in Delhi on Sunday morning.

The protest was helmed by the Uttarakhand President of AAP Brij Mohan Upreti who said that using such foul and derogatory words against the legendary Shri Sunderlal Bahuguna has unveiled the mentality of the leaders of BJP and that such remarks resulted from Shri Arvind Kejriwal honouring the legacy of the late environmentalist.

Shri Kuldeep Kumar, MLA, who was also present at the protests, said that the BJP had insulted the entire country by this move and that AAP will continue to protest against them till they apologise.

Stressing on the unacceptable actions and remarks of the BJP, President of the Uttarakhand Wing of the Aam Aadmi Party, Shri Brij Mohan Upreti said, “The leaders of the BJP cannot think and process after the AAP National Convenor Shri Arvind Kejriwal installed a portrait and a statue of the great environmentalist in the Delhi Legislative Assembly. BJP is bound to see the same results as they saw in the elections of West Bengal. The people of Uttarakhand will not spare them this time. The people of the hilly regions living in Delhi, Chandigarh, Ludhiana and Uttar Pradesh will show their anger by casting their votes against the BJP.”

“If BJP is unwilling to apologise for this act, then AAP will continue its fight for the honour of the people of Uttarakhand,” Brij Mohan Upreti said. 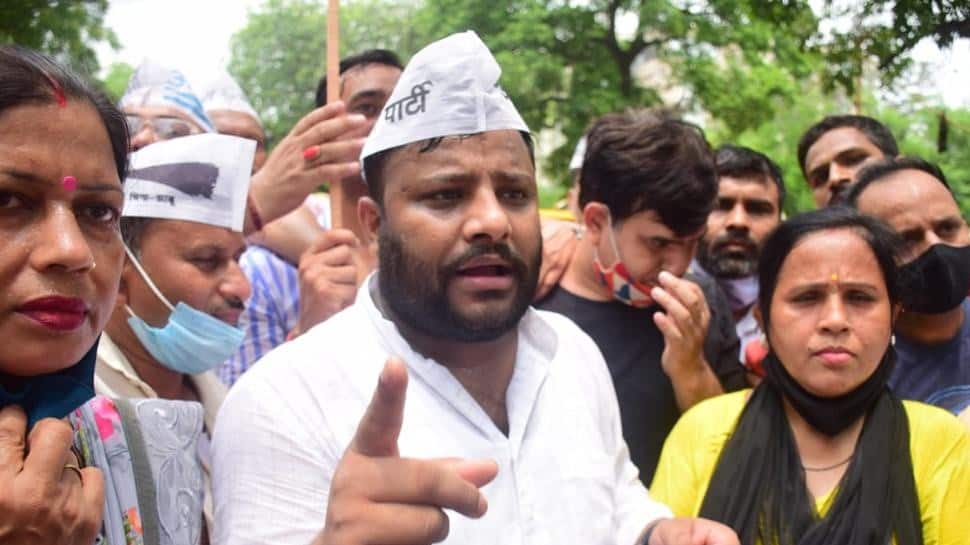 The Uttarakhand wing of the Aam Aadmi Party gathered at the BJP head office at 11.30 AM today to protest against the use of derogatory language by the leaders of BJP against Late environmentalist Sunderlal Bahuguna. Aam Aadmi Party workers gathered at the party headquarters in the morning and from there marched to the BJP Head Office in Delhi. During this, party workers raised slogans against the BJP.

AAP Uttarakhand Wing President Brij Mohan Upreti said that “BJP has insulted the people of Uttarakhand using unacceptable remarks against Shri Bahuguna. The leaders of BJP have become flustered after the AAP National Convenor installed a statue and portrait of the late Sunderlal Bahuguna in the Delhi Legislative Assembly.”

He said, “The people of BJP are ‘Blind Bhakts’ that made them use such language against a person who has received Padma Award from the Government of India and has also been honoured with Jamnalal Award and an honorary doctorate from the IIT.”

“The BJP people could have answered it in a different way as well. The BJP has become blind and their leaders are full of arrogance. The condition of BJP will be the same in the upcoming elections as we have seen in the elections of West Bengal. The people of Uttarakhand will not tolerate BJP more. All the people living in Delhi, Chandigarh, Ludhiana and Uttar Pradesh with an origin from the hills will avenge the insult of Late Sunderlal Bahuguna by casting their vote against the Bharatiya Janata Party,” Upreti said.

Speaking on the matter, MLA Kuldeep Kumar said, “this kind of derogatory language used by the BJP for the Late Environmentalist is unacceptable. Whatever you say against the AAP National Convenor Shri Arvind Kejriwal every day is a different matter but using such remarks for the ‘Gandhi of Uttarakhand’ is not only an insult to the people of Uttarakhand but to the people of entire India.”

The Aam Aadmi Party is working to fight this battle today and will continue to do so in honour of the people of Uttarakhand.