New Delhi: Amid heightened tension with China at the Line of Actual Control (LAC), Minister of State (MoS) for Finance Anurag Thakur has informed the Rajya Sabha that as many as 80 Chinese companies are actively doing business in the country.

The BJP leader said that 92 Chinese companies are currently registered in India. Thakur made these remarks while replying to a question about restricting the Chinese companies from doing business in the country in the aftermath of the Galwan Valley clashes during which at least 40 Indian soldiers and an undisclosed number of Chinese soldiers were killed.

Speaking on behalf of the government, Thakur said that the adequate rules are already in place and all companies are required to ensure compliance with the same. It may be recalled that the Narendra Modi-led government has earlier banned at least 59 Chinese mobile applications, including the highly popular TikTok, citing threat to the national security after the Galwan Valley incident in the eastern Ladakh. 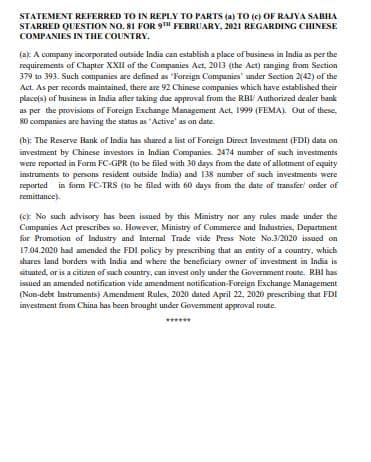 The Minister also informed that the Foreign Direct Investment (FDI) is regulated by the Reserve Bank of India and, except in some sectors including defence, space and atomic energy, it is allowed with the permission of the government.

Earlier in the Cabinet Committee on Security meeting on December 24, the government approved the National Security Directive on the telecommunication sector.

The move to create a secured national network would restrict the use of Chinese equipment by telecom operators in future 5G networks. India and China have been engaged in a nine-month-long standoff along the Line of Actual Control. Despite several levels of dialogue, there has not been any breakthrough.