As per an investigation by Greek City Times it was revealed that Turkey has been an integral part of the warfare to aid Pakistan in its disinformation campaign against India.

According report claims, Pakistan’s ISI is taking help from Kashmiri journalists living in Turkey with separatist bent of mind to discredit India.

It also revealed that Ali Keskin operating from Turkey, is a key link between the ISI and Turkish intelligence. Sources suggest that he is the central figure responsible for coordination between the Pakistani and Turkey on information warfare.

The pinned tweet on Ali Keskin’s Twitter handle contains a picture of the Turkish and Pakistani flags and reads – “Pakistan is not alone”.

It was noticed that tweets mouniting to ‘war-mongering’ were shared by Ali Keskin and were further spread mostly by Pakistani handles.

Keskin on September 1, 2020, declared a war with Greece, UAE, Israel and France in tweet saying: “EU countries Greece. He took a combat position by supporting. Greece, UAE, France and Israel lurk. War is an art for us, we are waiting.”

Experts of propaganda warfare have suggested that an analysis of Ali Keskin’s tweets and social media activities highlight that besides coordinating with the Pakistani propagandists, he has been assigned to hit countries targeted by Turkey.

As per Greek City Times, another prominent name that emerged was TRT journalist Umar Baba , who is believed to be working for the ISI. Both of them follow each other on social media and promote each-other’s content as well.

Besides, Pieter Friedrich had done several interactions/productions with Umar Baba in the past. 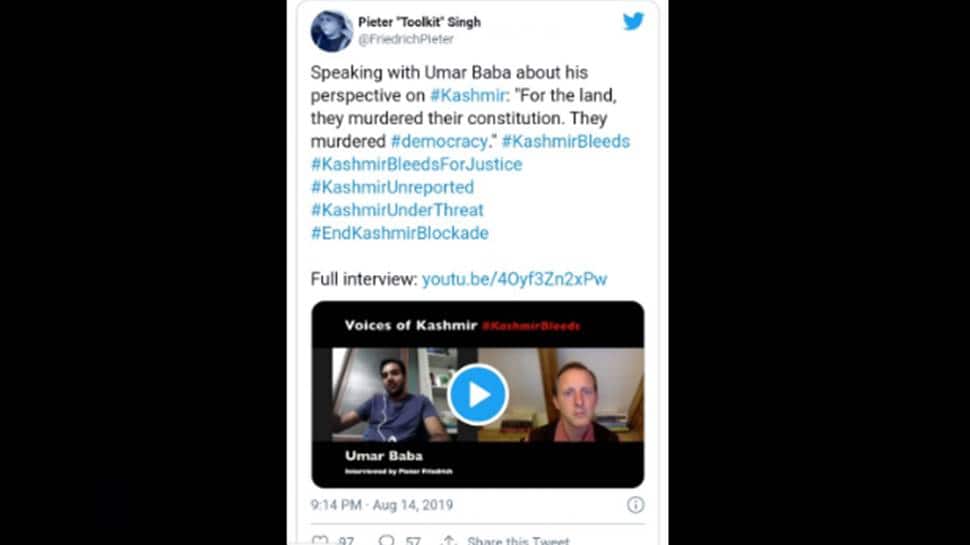 In one of the videos that he produced with Baba Umar, allegedly sponsored by Pakistan, he attacked India by taking a pro-Pakistani line on Kashmir. On further investigation, it was revealed that it was a part of a series of interviews on Kashmir in which Pieter Friedrich interviewed several proxies of the ISI.

The fact gets re-emphasised by the revelation that Pieter Friedrich has been aggressively pushing anti-India campaigns on Kashmir.

The tweet made by Pieter Fredrich on the interview reads – “Speaking with Umar Baba about his perspective on Kashmir: ‘For the land, they murdered their constitution. They murdered democracy’.

The report highlights that he is working on the K-2 (Kashmir-Khalistan) plan of the ISI, through which Khalistanis, Pakistanis, and the Turks have jointly waged a war against India.